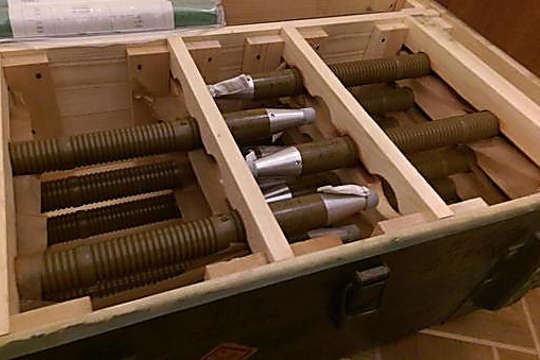 Ukraine’s state security service identified a Russian army major who was detained with a cargo of military explosives in eastern Ukraine July 26 and said he has been charged with terrorism.

State security chief Vasyl Hrytsak told reporters July 29 that Vladimir Starkov, 37, from Russia’s Kirov region, admitted immediately he was a soldier in the Russian armed forces after he was stopped in a truck at a checkpoint 22 kilometers outside the separatist-held city of Donetsk.

While supporting the separatists’ cause, the Kremlin denies that its forces are engaged in the conflict in Ukraine’s east.

When Ukraine captured two Russian soldiers in May, Russia said the two men had quit their special forces unit to go to Ukraine of their own volition.

But that does not appear to be the case this time. In a video released by the SBU state security agency, Starkov said that after arriving for service in Russia’s Rostov region, he was ordered to go to Ukraine as a military adviser to the rebels.

“They [the commanders] place you before an accomplished fact that you will serve in”  the self-proclaimed peoples’ republics of Donetsk or Luhansk, Starkov said.

SBU officials say Starkov and another man in the truck who said he was a separatist fighter lost their way and drove towards  the checkpoint manned by Ukrainian forces where they were detained.

An SBU official told Reuters that Starkov has been accused of terrorism.