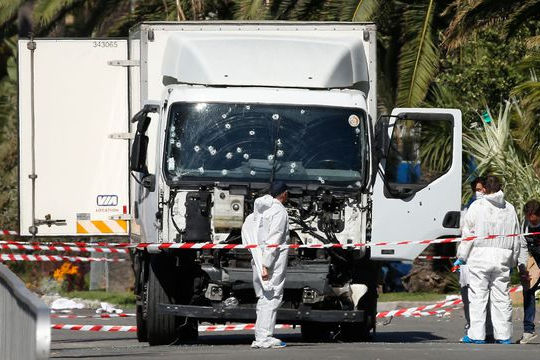 The driver of a truck that killed 84 people in an attack in the French city of Nice has been confirmed as Tunisian Mohamed Lahouaiej-Bouhlel, 31.

Some 202 people were injured; 52 are critical, of whom 25 are on life support. Ten of the dead were children.

Prosecutors said Lahouaiej-Bouhlel had driven the truck 2km (1.2 miles) along the Promenade des Anglais and fired at police before being shot dead.

Other weapons found inside the truck were replicas or fake.

Francois Molins said no group had admitted carrying out the attack but that it bore the hallmarks of jihadist terrorism.

Lahouaiej-Bouhlel drove the 19-tonne lorry into crowds celebrating Bastille Day at about 22:45 local time (20:45 GMT). He fired at officers with a 7.65mm calibre automatic pistol when the vehicle was close to the Negresco hotel and continued for another 300m, where his vehicle was stopped near the Palais de la Mediterranee hotel and he was shot dead.

Also found in the truck were an ammunition magazine, a fake pistol, replica Kalashnikov and M16 rifles, and a dummy grenade.

There was also a bicycle, empty pallets, documents and a mobile phone. Items were later seized from Lahouaiej-Bouhlel’s Nice home.

Lahouaiej-Bouhlel, a chauffeur and delivery man, had three children but had separated from his wife, who was taken into police custody on Friday, Mr Molins said.

He was known to the police as a petty criminal, but was “totally unknown to intelligence services and was never flagged for signs of radicalisation”, the prosecutor added.