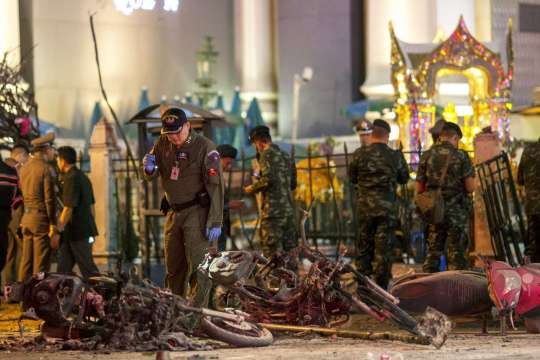 A bomb exploded at a popular shrine in central Bangkok during evening rush hour Monday, killing at least 18 people, injuring more than 100 and leaving body parts strewn across the streets of a neighborhood full of five-star hotels and upscale shopping malls, officials said.

No one immediately claimed responsibility for the blast, which caused the worst carnage of any single attack in recent memory in the Thai capital. Bangkok has been relatively peaceful since a military coup ousted a civilian government in May last year after several months of sometimes violent political protests against the previous government.

The area around Bangkok’s Erawan Shrine is filled with hundreds of tourists, office workers and shoppers at any given time. Police said the bomb was made from a pipe wrapped in cloth.

“Whoever planted this bomb is cruel and aimed to kill,” said national police chief Somyot Poompummuang. “Planting a bomb there means they want to see a lot of people dead.”

The shrine is at a major intersection that was the center of many contentious political demonstrations in recent years — raising questions about whether the bombing was politically linked. But police said it was too soon to determine the attack’s motive.

Security video showed a powerful flash as the bomb exploded at around 7 p.m.

At least 18 people were confirmed dead and 117 injured, according to the Narinthorn emergency medical rescue center.