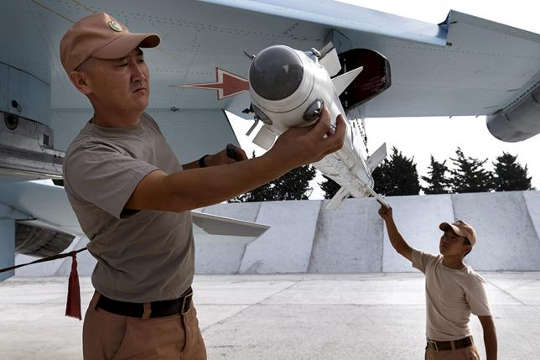 Moscow’s military force in Syria has grown to about 4,000 personnel, but this and more than a month of Russian air strikes have not led to pro-government forces making significant territorial gains, U.S. security officials and independent experts said.

Moscow, which has maintained a military presence in Syria for decades as an ally of the ruling Assad family, had an estimated 2,000 personnel in the country when it began air strikes on Sept. 30. The Russian force has since roughly doubled and the number of bases it is using has grown, U.S. security officials said.

The Russians have suffered combat casualties, including deaths, said three U.S. security officials familiar with U.S. intelligence reporting, adding that they did not know the exact numbers.

The United States has extensive intelligence assets in the region, along with satellite imagery and electronic eavesdropping coverage and contacts with moderate Sunni and Kurdish rebels on the ground in Syria.

The only death the Russian government has reported was that of a serviceman who the military said died by suicide. The man’s parents have said they doubted this account.

A U.S. defense official said Russian aircraft are now operating out of four bases, but multiple rocket launcher crews and long-range artillery batteries are deployed outside the facilities.

They have a lot of people outside the wire

Victoria Nuland, the top U.S. diplomat for Europe, told U.S. lawmakers Russia had begun to deploy ground assets such as artillery to areas Assad forces have lost to the moderate opposition, including near the cities of Hama and Homs.

“Russia is fielding its own artillery and other ground assets around Hama and Homs, greatly increasing Russia’s own soldiers’ vulnerability to counterattack,” Nuland, assistant secretary of state for European and Eurasian Affairs, said.