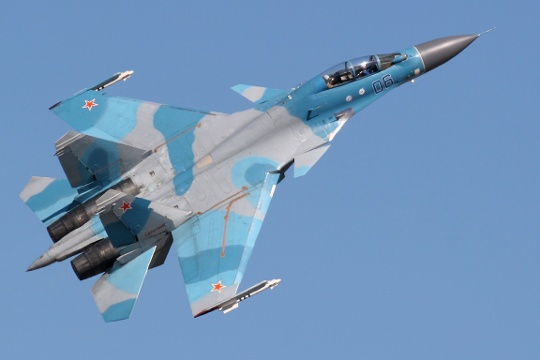 (The Aviationist) – Russian Su-30s and Su-24s aircraft from Russia’s Black Sea Fleet based in Crimea have been conducting attack runs on NATO warships operating in the Black Sea, Sputnik News reported.

According to the Russian media outlet, the jets, launched from Novofedorvka, an airbase captured on Mar. 22, 2014, in western Crimea peninsula 70 kilometres north of Sevastopol, have been monitoring the movements of two ships, the American USS Vicksburg (a Ticonderoga class guided missile cruiser), and Turkey’s frigate The Turgut Reis.

On Mar. 3, a formation made of three Su-30s and four Su-24s overflew the NATO ships “to practice penetrating anti-air systems,” as affirmed by a source at the Sevastopol naval base who spoke to the Russian state agency.

Interestingly, the Russians believe these missions are used for training purposes by both sides: “These ships’ crews are doubtlessly conducting exercises in repelling air attacks from our planes, which gives our pilots the opportunity to gain experience in maneuvering and conducting aerial reconnaissance both in the range of anti-air systems and outside their range.”

Close encounters between Russian planes and NATO ships around the globe happen quite frequently; they have just become a bit more frequent in the Black Sea since last year’s Russian annexation of Crimea: following the invasion of the peninsula, Moscow has moved combat planes to the local airbases and some of them pay visit to the NATO frigates in the vicinity every now and then.

In April 2014, a Su-24 Fencer flew multiple passes at 500 feet above sea level, within 1,000 yards of the USS Donald Cook, the U.S. Navy destroyer operating in the Black Sea at that time: a behaviour that the ship commander considered “provocative and inconsistent with international agreements.”

Anyway, according to a source at the Russia’s Chief Naval Staff quoted by TASS, the two NATO warships will be joined in the next few hours by the Italian frigate Aliseo and Canada’s frigate The Fregerickton which are passing through the Black Sea straits.