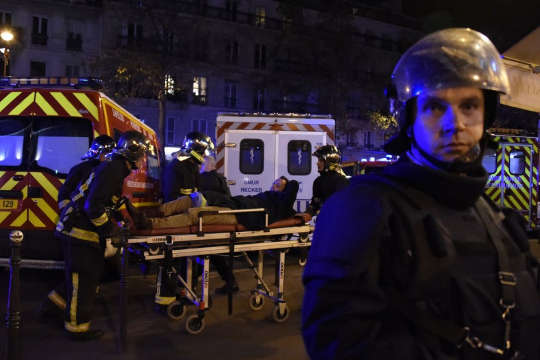 Over a 100 people died in a popular Paris concert hall where attackers seized hostages Friday, an official said, one of at least six terror attacks that unfolded across the city in the deadliest violence Paris has seen since World War II.

French President Francois Hollande declared a state of emergency and announced that he was closing the country’s borders. The violence spread fear through the city and exceeded the horrors of the Charlie Hebdo carnage just 10 months ago.

Paris police officials said security officials had launched an assault on the concert hall, killing all attackers. One described “carnage” inside the building, saying the attackers tossed explosives at the hostages.

In addition to the deaths at the concert hall, a police official said 11 people were killed in a Paris restaurant in the 10th arrondissement and other officials said at least three people died when bombs went off outside a stadium.

Hollande, who had to be evacuated from the stadium when the bombs went off outside, said in a televised address that the nation would stand firm and united.

“This is a terrible ordeal that again assails us,” he said. “We know where it comes from, who these criminals are, who these terrorists are.”