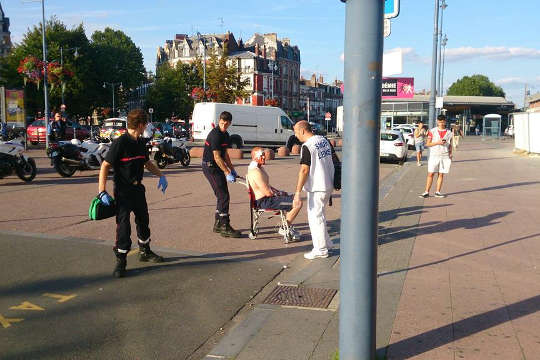 Three people were wounded in a shooting by a heavily armed gunman on a high-speed train between Amsterdam and Paris on Friday, French Interior Minister Bernard Cazeneuve said, and reports said U.S. Marines had overpowered the assailant.

The terrorist was arrested when the train stopped at Arras station in northern France. A ministry spokesman said the attacker’s motives were not known. Cazeneuve said the French anti-terrorism prosecutor was investigating the case.

At a news conference, the minister said two U.S. citizens had been on board and helped disarm the attacker.

Without their courage we would have surely faced a terrible tragedy

The wounded included a French actor, Jean-Hugues Anglade, Cazeneuve said, as well as an American and a Briton.

The man was armed with automatic weapons and blades. He was stopped by passengers

Police union official Slimane Hamzi said the 26-year-old man had said he was of Moroccan origin.

France has been on high security alert since Islamist militants killed 17 people in and around Paris in January.