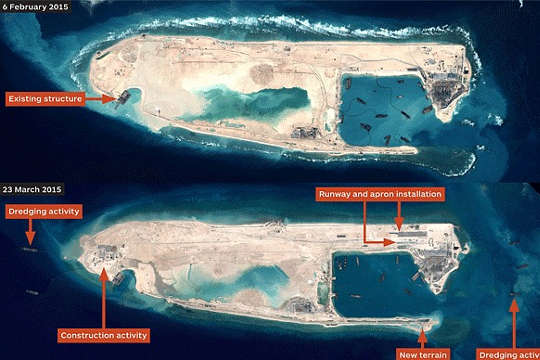 Tensions in the South China Sea escalated further on Thursday after reports that a United States spy plane had flown over contested islands in the region triggering eight separate warnings from Chinese navy officials.

Foreign military aircraft. This is Chinese navy. You are approaching our military alert zone. Leave immediately

A Chinese naval officer warned the P8-A Poseidon, the US’ most advanced surveillance aircraft, as it flew a mission over the Fiery Cross Reef.

The drama was captured by a team of CNN journalists who had been allowed to accompany the American foray on Wednesday.

The plane flew as low as 15,000ft over the Fiery Cross Reef, in the Spratly island chain, where China has been accused of waging a massive and provocative land reclamation campaign.