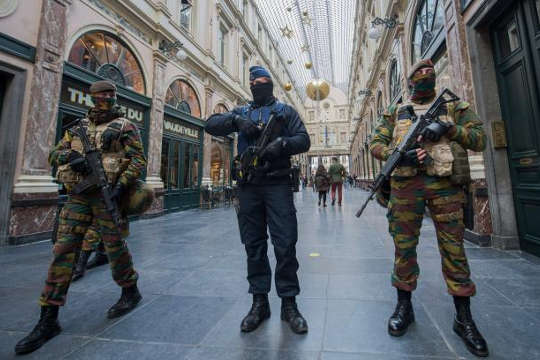 Soldiers patrolled the streets of Brussels and police detained five more people on the third day of a security lockdown on Monday, as Belgium hunted a suspected Islamist militant who has been on the run since the attacks in Paris.

Authorities are still warning of possible imminent attacks like those in the French capital this month, in which 130 people were killed, and hunting Brussels barkeeper Salah Abdeslam, who returned to the city from Paris hours after the Nov. 13 attacks.

Police did not find Abdeslam, whose brother blew himself up in Paris, in 22 raids late on Sunday when 16 people were detained. Five more people were arrested during searches of seven houses in the Brussels and Liege regions early on Monday.

Police have given no details of those held. No weapons were found on Sunday but 26,000 euros in cash, found at a single site, was seized by prosecutors.

The metro, museums, most cinemas and many shops will stay shut on Monday in the usually bustling EU capital where many staff have opted to work from home. There was also no school or university for almost 300,000 students.

NATO, which had raised its alert level since the Paris attacks, said its headquarters in the city were open, but some of its 1,000 staff had been asked to work from home and external visits had been canceled.

EU institutions, which employ some 21,000 people in Brussels, were also open with the soldiers patrolling outside.