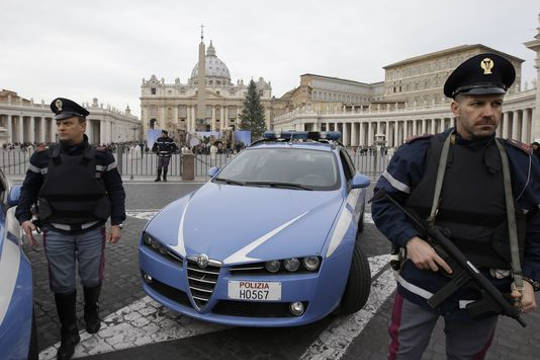 Italian police were arresting 18 people on Friday suspected of belonging to an armed group linked to Al-Qaeda who were plotting attacks on the Vatican as well as in Pakistan and Afghanistan.

Some of the suspects, who are all Pakistanis and Afghans, were arrested in early morning raids across Italy. Police burst into the home of the group’s suspected spiritual leader, in the northern city of Bergamo, a video released by them showed.

Though the suspects were plotting attacks mainly in their native countries, phone taps suggest the Vatican was also a target, said Mauro Mura, chief prosecutor of the Sardinian city of Cagliari, where the group based its headquarters.

In the tapped conversations, the suspects discuss : “a big jihad in Italy,” added Mario Carta, head of the police unit on the case. They reference the word “baba”, which could mean the pope, Carta said.

“We don’t have proof, we have strong suspicion,” that the Holy See was a possible target, he added.

Vatican spokesman Federico Lombardi said the hypothetical attacks were in the past, and that the new disclosures were not a matter for concern.

Italian officials are also concerned that members of terrorist groups might be hiding among the thousands of migrants who arrive in desperate state on Europe’s shores every week.

Outlining the investigation at the news conference, Mura said the group had a large number of weapons and numerous followers willing to carry out acts of terrorism.

Police wire taps had determined that two people among the 18 targeted by arrest warrants were suspected of being part of a group that had protected Al-Qaeda leader Osama bin Laden, who was killed by U.S. special forces at his hideout in Abbottabad, Pakistan in 2011, police said in a statement.

The group supported the “armed struggle against the West”, and wanted to incite a popular uprising against the Pakistani government so it would stop its backing of U.S. forces in Afghanistan. 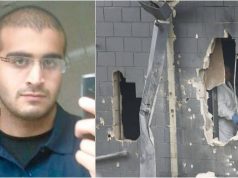