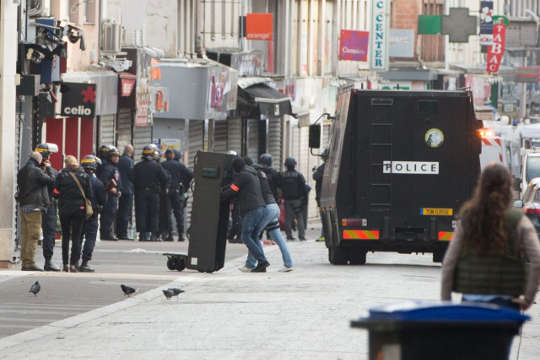 UPDATE 11/20: Police reports that the bomber was a man.

A woman suicide bomber blew herself up and another terrorist died on Wednesday when police raided an apartment in the Paris suburb of St. Denis seeking suspects in last week’s attacks in the French capital.

Three sources told Reuters the raid stopped a jihadist cell that had been planning an attack on Paris’s business district, La Defense, after coordinated bombings and shootings killed 129 across the city.

Officials said police had been hunting Abdelhamid Abaaoud, a Belgian Islamist militant accused of masterminding the Nov. 13 carnage, but more than nine hours after the launch of the pre-dawn raid it was still unclear if they had found him.

Seven people were arrested in the operation, which started with a barrage of gunfire, including three people who were pulled from the apartment, officials said.

It is impossible to tell you who was arrested

“We are in the process of verifying that. Everything will be done to determine who is who,” Paris prosecutor Francois Molins said at the end of the operation.

Molins said the assault was ordered after phone taps and surveillance operations led police to believe that Abaaoud might have been in St. Denis, near to the soccer stadium which was site of one of the attacks that hit Paris last week.

Investigators believe the attacks — the worst atrocity in France since World War Two — was set in motion from Syria, with Islamist cells in neighboring Belgium organizing the mayhem.

Local residents spoke of their fear and panic as the shooting started in St. Denis just before 4.30 a.m. (0330 GMT).

“We could see bullets flying and laser beams out of the window. There were explosions. You could feel the whole building shake,” said Sabine, a downstairs neighbor from the apartment that was raided.