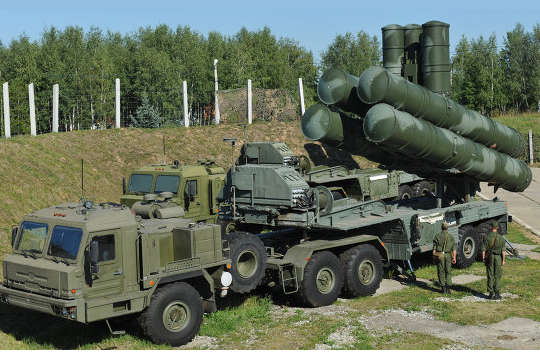 A deal between Russia and China for procurement of the new S-400 air defense system will serve as a force multiplier for Beijing in its quest to dominate the skies along its borders, experts said.

The 400-kilometer-range system will, for the first time, allow China to strike any aerial target on the island of Taiwan, in addition to reaching air targets as far as New Delhi, Calcutta, Hanoi and Seoul. The Yellow Sea and China’s new air defense identification zone (ADIZ) in the East China Sea will also be protected. The system will permit China, if need be, to strike any air target within North Korea.

The S-400 will also allow China to extend, but not dominate, the air defense space closer to the disputed Japanese-controlled Senkaku Islands in the East China Sea, said Vasiliy Kashin, a China defense specialist at the Centre for Analysis of Strategies and Technologies, Moscow. China refers to the islands as the Diaoyu, and tensions between Beijing and Japan have been increasing for several years as China continues to claim the islands.

China’s current inventory of S-300s, at a range of 300 kilometers, only allows it to strike targets along Taiwan’s northwestern coast and cannot reach capital cities in India and South Korea, said Alexander Huang, chairman, Council on Strategic and Wargaming Studies, Taipei. The S-400 will challenge  Taiwan’s ability to conduct air defense operations within its own ADIZ, which covers the Taiwan Strait.

Rosoboronexport CEO Anatoly Isaikin announced the sale on April 13. He told news media outlets that the S-400 was in demand in the international market and that China would be the first export customer. No specifics were revealed, but the actual contract was most likely signed in the last quarter of 2014, Kashin said. He said the deal will include four to six battalions at about US $3 billion.

The S-400 is capable of intercepting missiles and air breathing targets, he said. Rosoboronexport, Russia’s state defense export agency, did not respond to Defense News requests for additional information.

The S-400 is a decent system and an evolutionary progression of China’s air and missile defense modernization, said Mark Stokes, executive director of the Project 2049 Institute. “It would be interesting to know what specific missile variant is being exported, and where the systems would be deployed,” he said.

Deployment of S-400 systems opposite Taiwan could drive Taiwan to increase investment into asymmetric capabilities designed to exploit vulnerabilities in China’s air defenses, he said.

Taiwan’s Ministry of National Defense (MND) is not surprised by the revelation and the military is keeping a close watch on developments, said Maj. Gen. Luo Shou-he, MND spokesman. Russia and China have cooperated closely on military issues for decades, he said, including arms sales and exchanges of defense technology.

“To cope with the potential threat of this new system, the ROC [Taiwan] armed forces has already completed its analysis of the missile threat, and tweaked its tactics and strategies to reflect countermeasures for engaging the S-400”

Flight training by Taiwan’s armed forces would still continue as planned and remain unaffected by the new system, Luo said .

“In the future, the ROC military will continue to keep a close eye on China as the S-400 begins deployment and take precautions for any possible new contingencies.”

Kashin said China is gradually improving its long-range air defense missile production capabilities, but still lags behind Russia in this area. Chinese systems sometimes compete effectively on international markets, “but that was achieved not so much by the system capabilities but by Chinese willingness to provide favorable financial conditions and to transfer technology,” he said.

China would no doubt attempt to reverse engineer the S-400, as it has done with previous sales of the S-300, but reverse engineering is time consuming, Kashin said, and Russia is now working on the next-generation S-500. The S-500 is expected to enter serial production in 2017; roughly, the same time China receives its first S-400 delivery, Kashin said.